I hope everyone had great Holidays.  Welcome to another election year.  We’ve already had news. 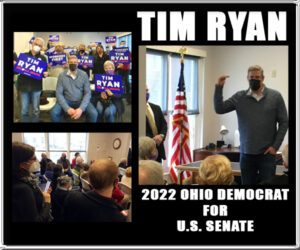 On the afternoon of Wednesday, January 5, the Deputy Political Director of Tim Ryan’s Senate campaign called me. Congressman Ryan was going to be in Cincinnati the next day and had an opening in his schedule. Would we put together an event for Tim Ryan in Clermont County on the afternoon of Thursday, January 6? I spoke with a couple of our other CCDP leaders who both felt we should decline because we were unlikely to do a decent event on such short notice. They made good points, but I felt it would be worse to refuse when a statewide Democratic candidate asks for our help than to hold a bad event. The Ryan campaign wanted to bring Tim to Clermont County on January 6. I agreed we’d hold an event at headquarters in Batavia.

We had a successful event. Excluding Congressman Ryan and his staffers, I counted thirty people in attendance. That is a good crowd in our headquarters. Congressman Ryan stayed for over an hour, giving his campaign pitch, answering questions, and meeting people. If you have not heard Tim Ryan speak, go hear him. You will be impressed. Rather than the things the Republicans running for Senate are talking about (primarily who is most loyal to donald trump), Tim Ryan talks about the economy, about how we can compete successfully with China, and how we can help middle class working Americans. As Tim asks, do we want a Senator who calls Mar-A-Lago to be told how to cast each vote or a Senator who votes the interests of working Ohioans?

The Tim Ryan event was successful, of course, because of the people who came. I thank all of you who did. Huge thanks also go to Michelle DeTemple, Don Moss, Cheryl Richards, and everyone else who immediately put word out about the event by phone, e-mail, and on social media. Working together, Clermont County Democrats can accomplish things that seem improbable if not impossible.

We were joined on January 6 by three other announced candidates. The night before at the Democracy in Action meeting, Alan Darnowsky announced that he is running for Congress. Many of us know Alan and know he will be outstanding in the U.S. House of Representatives. The contrast between Alan and the incumbent is day and night. Please help Alan. Sign his petitions to get on the primary ballot. Give what you can afford. Knock doors. Make calls. Deliver literature. The Second District, as currently drawn, is a nightmare. It includes a sliver of Hamilton County and runs as far east as Meigs County. It includes all of twelve counties, and parts of others. The task is huge but, if we work together, we can finally get representation for working Southern Ohioans in Congress.

Brian Flick joined us on January 6. Brian is running for the Ohio House of Representatives from District 62. This district, as currently drawn, is primarily Miami Township, Union Township, and the Milford and Loveland areas. This is the part of the County with the largest number of Democrats. The incumbent is Jean Schmidt. If you live in District 62, think about who you’d rather have representing you in Columbus: Jean or Brian? That isn’t a difficult choice. We must help Brian, starting with Democrats in District 62 signing his nominating petitions. You can do that Friday, January 14 between 5:00 p.m. and 7:00 p.m. at the RJ Cinema in Eastgate.

Ben Brady also came to meet Congressman Ryan. Ben is running for one of the two seats on the Democratic Party State Central Committee from our state senate district. The other seat must be held by a woman under Party rules and is not up for election this year. The woman who holds that seat does a fine job, but she is in Portsmouth, about 100 miles from us. It is critical to have someone who will advocate for and represent Clermont County on the state central committee. The May primary is the election for state central committee. You will hear me say this often between now and then: We must elect Ben. Vote a Democratic ballot in the May primary and vote for Ben Brady for State Central Committee! Get your friends and family to do that too.

We still need candidates for County Commissioner, County Auditor, and Ohio House District 63 (the rest of Clermont County and a large part of Brown County).  If you’ve thought about running for public office, this is the year to turn thought into action.