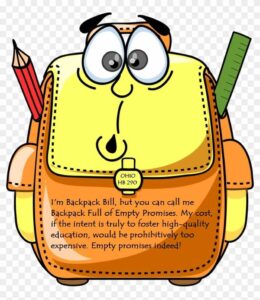 The HB290 crusaders have produced and sent a fundraising mailer signed by one Aaron Baer to an undisclosed list of folks. The seven-page letter warns recipients that public schools are indoctrinating our children into radical anti-Christian ideology, “Critical Race Theory, and trans advocacy”. “They are being trained to hate America”, the letter says. They evidently combed through the classrooms of Ohio and found 4 students whose teachers were doing something that hinted at support for CRT or other controversial issues. They didn’t mention the 100,000 plus public school educators that are working selflessly to grow upstanding citizens.

The author of the letter makes such revealing statements as:

The Backpack voucher campaigners are perpetuating the myth of the “failing public school monopoly” as a key plank in their campaign platform.

Public school advocates, who believe HB290 is too extreme to pass, need to wake up.